“Copacetic” is a positive word, made popular in the smoky jazz clubs of 1920s and 30s America. It means “in excellent order”, “completely satisfactory”, “sorted”. A Copacetic Gent is someone who gets it right every time – especially with their style. He makes great efforts to look perfect…whilst seeming to make none at all.

Savills Barbers of Sheffield is famous worldwide for being a time-warp back to the 1930s where gentlemen’s barbers were respected craftspeople and confidants. A personal and individual service to each customer was key and copaceticness abounded. Savills attitude, look and style all combine to give an experience unlike any other but they found that the current selection of styling products they were using didn’t quite fit in with their ethos…they were just not Copacetic enough. So they decided to invent their own! The Copacetic Gentlemen’s Grooming brand was born and was soon developing paste, wax, pomade and other mysterious substances which we didn’t even know were a thing.

Copacetic Gentlemen’s products (as well as equipment such as combs, scissors and aprons) were initially used only in Savills and sold to their own customers, but it soon became clear that other like-minded barbers around the world were in similar need – so the range was made available to them as well, in distinctively branded packaging. Copacetic proucts were sold to barbers for their own use but they were also selling them on to their own customers, as Savills themselves had been doing. As sales increased Savills decided to start selling the Copacetic range online and a website was commisioned.

Unfortunately, the initial results were less than copacetic and the team reached out to us for help.

Working with the Savills / Copacetic team we came up with a plan and a way forward. The site needed to cater for three customer groups:

The final piece of the jigsaw was that Copacetic had just established an efficient system where the manufacturer of the product was also able to package and distribute it without Copacetic being involved, so orders from the website needed to be sent to them to be processed as well as to Copacetic for administration purposes.

Style-wise, Copacetic Gent had already evolved a strong brand by being part of Savills. The brand now needed to stand up for itself and be part of the process of taking the user back to the early 20th century. 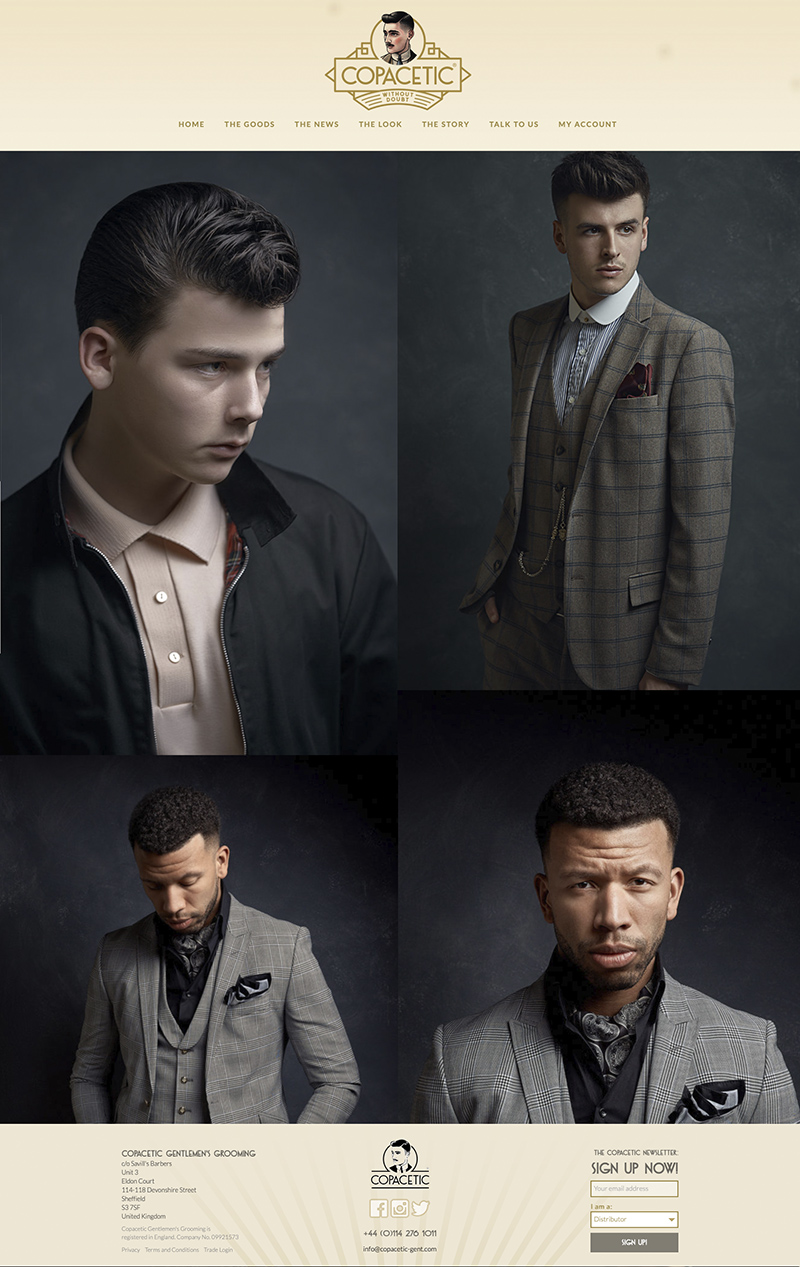 With one of us already being a lifelong fanboy of the Art Deco style, the design brief was a gift. Copacetic’s already strong brand was steeped in the geometric, lavish, retro-futuristic styles of the ’20s and ’30s and we needed to translate that across to the site. We were aiming to give the impression not of something imitating that style but something designed in the 1920s which had been locked away, aged and been rediscovered. Everything is slightly faded, distressed and muted…but not enough for it to be noticable or look contrived. There aren’t many solid blacks or pure whites and the site background almost gives off a smell of old books.

Through Savills numerous photoshoots, Copacetic have access to an excellent collection of photographs which are used to full advantage throughout the site, especially on the inspirational “The Look” section, which is designed to keep growing and evolving with current styles.

We used WordPress coupled with WooCommerce, as the client was familiar with this combination. However, they were unaware of the level of customisation we could provide. Their prior experience had been of an out-of-the-box installation of WordPress and WooCommerce with very little personalisation, so were initially under the impression that this system was OK, but not flexible enough for them to run the site alone and make changes themselves in the future. They were expecting they would need to be asking us for help constantly when additions were needed. We soon swept this myth away with:

We also made good use of the Trello system to manage the project, communicate progress with the client and deal wth feedback – something which we have been experimenting with over the last few months.

The day after the launch, and with no promotion the site was already making sales. Since then everything’s continued to be Copacetic!

Orders are running through the system as expected and an SEO and PR project is beginning in order to boost the profile of the site. Copacetic Gentlemen’s Grooming has become another iconic Sheffield brand.

Also, we now all have better haircuts.