When freelancing at a design studio in the 1990s we used to use a Sun Microsystems SPARC server to hold the image library and to run an OPI (Open Prepress Interface) system. OPI cuts network traffic and speeds up workflow by automatically creating a low-res version of any image you save on it. All the workers in the a studio use these images in their layouts instead of the full res ones. When the time comes to create artwork, the server automatically substitutes these placeholders for the full-res images. So you only need one storage location for high res images and, instead of everybody sharing them constantly and clogging the network up, they just use the tiny placeholders instead. When worked out across the day factoring in the number of workers in a large studio, the number of images they place in documents like catalogues and the size of each image it saves a massive amount of time and, therefore, money.

Whilst this is undoubtably a genius idea, it wasn’t that which fascinated me. It was the logo on the front of the server. I’d spend time I was meant to be working gazing at it and thinking how clever it was. 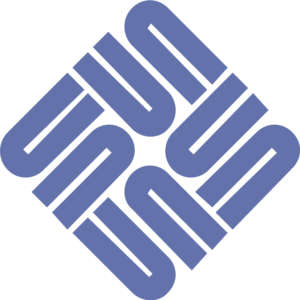 At first glance you might not notice, but look at it for a while and you’ll see. You’re not actually ever looking at the word “SUN” even though you are reading it as that. It’s a great example of an ambigram, which is something that means the same whichever way around it’s viewed from. A few logos work like this…

…in that they are the same upside down, backwards or reflected, but the Sun symbol works elegantly in four directions – in fact, infinitely.

Professor Vaughan Pratt came up with it in 1981 when he was working for Sun. In 1983 someone turned it on its corner which helped, and it’s had colour changes and other things added around it across the years it but the symbol itself has remained since.

So Why is it so Clever?

If you start at any one of the “S”s and read across, you get “SUN”. Then, at some point as you rotate the logo, the “UN” of that word magically turns into the “S” to start the word “SUN” on the next side of the square. This keeps happening until you reach the start again and just goes on forever. There isn’t actually a proper letter “S” in the logo at all – it’s an illusion made by the other two letters of the word stacking on top of each other.

It works because the “UN” part makes an “S” when they are drawn in that particular way and rotated 90°. It’s the kind of fluke that’s a gift to a designer and, to Pratt’s credit he spotted it and made the most of it. Annoyingly, he wasn’t even a designer!